Velvet Cupcake Experiment After Baking I

The recipe will come, once I am happy with taste, texture, colour and all that. It may take some time though (And I will add more photos then)! For those who are a little excited and want to start going themselve, the base recipe experimental stage is posted at the end of this post. Originally, my journey started with some Broken Glass Red Velvet (Dexter or Halloween) Cupcakes I saw.

This picture on the left is one of a fantastic looking recipe by Ruthanne on ‘easybakednet’, but the idea started much earlier. To track down the idea, I searched for the oldest posts I could find. The oldest post I could track down without major hassle regarding Glass Shard Cupcakes was the one from Nervous Chef from October 2010. Credit where credit is due, he seems to have gotten the idea from Lily Vanilli or their book Sweet Tooth (not quite sure), but I could not find a photo of their cupcake idea. Lily Vanilli have some other cool cake decorations, though, whith cakes that look like they actually taste as good as they look (somewhat rare these days in some parts of the world) – ideas including brain cakes… I also found some Zombi Treat brain cupcakes  and Snew, who offers a brain mold. But I digress in food-nomnoms *soooo unlike me *hehe

So I guess Nervous Chef posted the original idea. A slightly improved ‘glass’ and nice recipe appears just a tad later, according to google on the 31st of October from Jai on ‘allrecipes’. He’s got some better-looking glass shards, seriously better. But Nervous Chef mentions a cherry filling, which is supposed to splash out of the cupcake like fresh blood when eaten. YAY AWESOME. Megan on ‘polishthestars’ has a Dexter-blood-splash themed cupcake, with much better looking blood. So I’d like to combine them to give a really cool YUK-AWESOME Blood-Zombie Scare Cupcake.

Now I was searching for the base, to make it ‘original’ *haha – CUPCAKES of RED VELVET CAKE being ORIGNAL – but more often than not, these searches have led me to some AMAZING food creations, so I went on my endeavour! Red Velvet Cake – one of the iconic cakes of the South of the U.S. I have learnt. It’s actual origin shrouded in a mystery, with legends saying the recipe was sold from the Waldorf-Astoria, priced way too high so the lady buying it, would spread the recipe among everyone she knew to get even. Apparently this is only a (funny and clever) urban legend with the true core circling around the fact that this cake was/is available at the Waldorf-Astoria, but some say the cake was most likely originating in the south of a line of ‘velvet’ cakes. These were known for their velvety, soft, airy texture. The reddish hue the cake used to have, was being said to come from a chemical reaction between the natural compounds of cacao, buttermilk, bicarb soda and vinegar. While there are no links given for the source of this chemical reaction, it makes sense to me. Also, I have a hard time imagining someone just tipping a jug full of red food colouring into a cake and it becoming so popular over night just because of the colour. There must be a development there! Another origin story states Eaton, a deparment store chain in Canada, as the source sometime in the 1940ies and 50ies. Yet another version, quite nicely summarized by Tux, talks of ‘red sugar’ – modern days ‘brown sugar’ and any cake with a soft, airy texture and nice crust was called velvet and the sugar making it a ‘red’-‘velvet’ cake. Nothing super special here. Furthermore, in times of scarce resources and when the cake was known already, apparently Adams, a food colour/dye company, came up with popular recipe card with a Red Velvet Cake Recipe, using quite a fair bit of food colouring and other ingredients – what a coincidence? Either way, I was trying to dig things up and get into the Red Velvet Cake Craze 😉

And then I absolutely had to know how to make ‘original’ Red Velvet Cake, which I ‘decided’ had to be without food colouring originally. Original, hence, is a story in itself, which I will not delve into. A cake without food colouring is what I think/thought anyway.The mysteriousness of the unprocessed chocolate powder (non-Dutch, but raw) turning red was too much of a temptation for the scientist in me. The recipes, stating copious amounts of food colouring just didn’t quite look right to me. And then raw cacao apparently contains anthocyanins, which become brighter red in the presence of acids and maybe other baking ingredients, especially when heated. Not that I expected to be the red to be food colour ‘bright bright’ eye-sore red. More like a reddish hue in the brown. Discouraged by Joe Pastry’s post about the myth of red chocolate busted, I went into the kitchen, unpacked my various ingredients, and tested it. In the pictures I compared Dutch processed and the precious Raw Cacao before and after baking.

The Raw Cacao is REALLY hard to find here, all other types are either Dutch-Processed or it did not mention (and you can’t peek into the packet), so one cannot be sure. The processing turns the cacao darker, less acidic (alcalysation process) and makes the taste milder, but creates less depth. A helpful explanation with photos was posted by Alice Medrich on 52, which made me see the difference really well. We really only get the Dutch processed regularly here and back in Germany. The deep dark, almost black-brown fine stuff. All others are generally mixed with icing sugar, ready to drink.

Now, I placed Dutch on the left, Raw on the right on the top line, then added citric acid (about 1/4 of a tsp) and a bit of water and mixed with a toothpick (tastes horificly acidic) and then added potash (potassium carbonate, a traditional leavening agent) which is highly caustic on the bottom. At this stage, the cacao with acid had a reddish-tone to it, both of them, much more so than the caustic ones, which looked black-blue-ish, with the Raw Cacao on the bottom right almost falling into a poop-greenish brown- YUK! 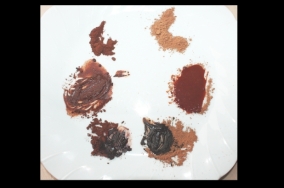 However, then I proceeded to bake this under the grill and the colours changed a tiny bit. It’s hard to see and really only a background-note, but I tried to take pictures to make it visible. This picture shows the whole lot, while the following two show Dutch processed with acid and Raw Cacao with acid respectively after baking in close up.

The Dutch is darker and less orangy-red tinged, but has a reddish hue, whereas the Raw Cacao definitely has some slight more orangey-red in it.

Now, this is all fine and good, but does that hold, increase or vanish, when baked? Well, I needed to try this out. So I made a batch of six identical dry-ingredient mixes, added nothing (white velvet), Raw Cacao, Dutch processed, Raw Cacao with beetroot powder(2 tsp per 1/6th of dough) as well as Dutch processed with beetroot powder and finally Raw Cacao with food dye – lots – to see the difference. 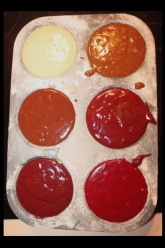 Velvet Cupcake Experiment Before Baking I

You can see the different outcomes of the powders in the cupcake pan. They all have different tinges of brown-orange-red. Top left is white velvet, obviously, then top right raw cacao (no particularly strong red hue to see), middle left dutch processed (ditto), then middle right Raw Cacao and beetroot and bottom left Dutch and beetroot and finally bottom right food colouring. So far so good. After baking, it looked like the picture below. (The beetroot ones I think smelled funny)

Velvet Cupcake Experiment After Baking I

Not much of a difference on first glimpse between all but the white and food colouring. However, on close-up, the Raw Cacao had a pretty red tinge, so had the Dutch one. Since the beetroot ones appeared to be LESS red, I was doubting my disassembly of the pack. Maybe I’ve mixed something up? So I gotta do the experiment again. I think *lol Either way, there IS a difference between some of them, it’s just not pronounced.

The three that I THINK are white velvet, pure Raw Cacao and food colouring are on the last picture for today. So stay tuned for a verification-experiment soon!

The current state of the experimental recipe:
I use a Rose’s White Velvet Cake base recipe, with a lot of tweaks, since I want to get the without-added-colour ‘red’ velvet tinge going.
My ingredients:
5 egg whites
240 mL buttermilk
1 Tbsp vinegar, white (I used malt since I ran out, but will use white later)
3 tsp vanilla extract, homemade (vanilla beans and scrapings in vodka)
250 g plain flour
50 g potato starch
300 g sugar (I will use more next time, this cake is just way too plain)
7 g bicarb soda (I will use 6 g, since the taste was a little strong)
1 pinch of salt (5 g – I tried to weigh it to see how much it was, WAY too much)
100 mL oil, sunflower or other low taste
70 g butter, softened
and now the most important: 6 tsp of RAW cacao powder, NOT dutch processed. I have beaten the egg whites before adding them as well, to make the cake more velvet-y. The taste is a bit blunt. Without the cacao, the taste is smooth and very subtle, OK as is, but the plain cacao one probably needs way more sugar and vanilla to give it body – it tastes – uhm – blunt, flat, characterless. I need to work on that 😉 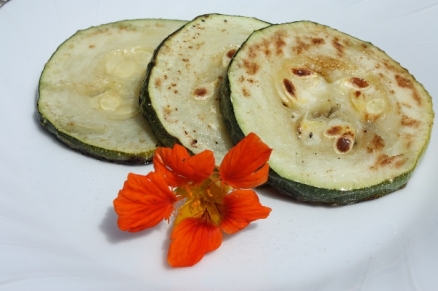 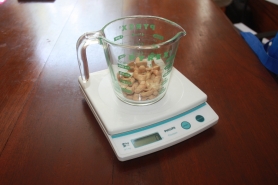 Cashew Nuts in a Jug on scales. 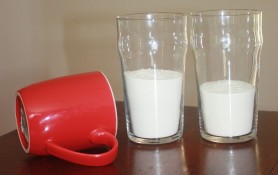 One cup of flour measured compacted and sifted, then compacted.